Big Green Egg Grill: Are They Worth the Money? 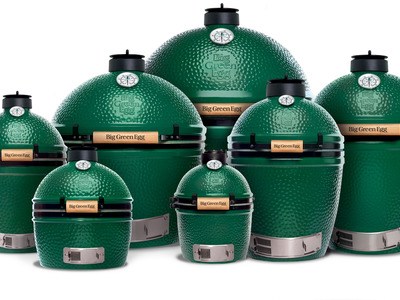 Even to a novice barbecue enthusiast, some grill names have the advantage of being universally recognizable. This is especially true for the iconic ceramic, or “kamado,” style grill — the Big Green Egg. The BGE garnered attention as the first of its kind in the United States.

Not every product that’s first to the market has the luxury of becoming so synonymous with its brand, yet the Big Green Egg remains known to this day.

In spite of nearly fifty years since its introduction, the Big Green Egg still remains one of the most accessible kamado grills, and one of the most durable. And when (inevitably) parts need to be replaced, the job can easily be done on your own.

While many grills appeal to either novices or accomplished backyard veterans, the Big Green Egg is a fantastic choice for both.

So, what makes the Big Green Egg so enticing — and expensive?

What is The Big Green Egg Grill?

The Big Green Egg popularized a type of grill that originated in East Asia. American soldiers encountered the “kamado” grill during World War II, and found themselves enamored with the unique features of it.

While a standard charcoal grill requires more maintenance for certain levels of heat, the Big Green Egg’s predecessors were used for a variety of cooking methods. The grill did not just center on meat, but instead could cook rice in a pot inside the grill while simultaneously grilling whatever its user desired.

The versatility was not the only benefit, as the ceramic grill could safely rise to impressive heat levels and remain there with complete stability. They utilized charcoal just the same as a standard grill, but the results were far more tender and flavorful.

When soldiers returned home from the war, several of them brought these ceramic grills back. It was a moment of cultural integration that was utilized by the Big Green Egg’s creators in 1974, when Ed Fisher launched the company in Atlanta, Georgia.

Kamado grills are known for allowing the user to keep a sustained temperature for a long period of time. That’s due to them being built out of clay or ceramic (or in some rare cases, another natural insulating material), depending on the manufacturer. While traditionally they were built out of clay, the Big Green Egg is built out of thick ceramic.

This is one of the reasons why they are so much more expensive than traditional charcoal barbecue grills. Whereas a charcoal grill is a fairly simple thing, it isn’t as easy to build (and transport) large grills made out of ceramic.

Yet, the benefit is obvious: ceramic is a better insulator, which means that kamado grills typically perform better than charcoal ones built from metal. A kamado grill can hold a steady temperature without finicking with coals or fancy igniters.

Typically, these grills are also larger and heavier — while Big Green Egg makes smaller grills, chances are if you’ve seen one before, you’ve probably seen one in their Large or XL sizes. These grills aren’t just large in size, they’re also heavy: so much so that you typically need a special stand to accommodate them. You wouldn’t just want to lift one around by yourself, or just stick one on a typical outdoor table. (A large, for example is 162 pounds — and they only go up from there!)

A simple look into the fanatical communities revolving around kamado style grills will yield a staggering number of obsessed devotees who claim nothing comes close to their performance. Barbecuers from all skill levels seem capable of wielding a control over their final products that leaves the mouth watering.

Is the Green Big Egg Really Worth the Money?

The Big Green Egg isn’t the only kamado grill — but it is the one that most are familiar with. So, is the BGE just a smokescreen of marketing or is it the real deal?

The Big Green Egg’s biggest draw is its ability to do one thing better than almost any other grill: give you precise control over the level of heat being used to grill your food as well as have the most amazing warranty (lifetime on the ceramic) and customer service.

Time and again, users report that your ability to influence the level of heat by utilizing the ventilation system is unparalleled. Likewise, when you pick a temperature, it stays there — for hours, unassisted.

When you use the BGE you are using a grill that is both determined to naturally flatten out fluctuation and eager to give you the power to control it. There isn’t much more you can ask for than excellent savory results all controlled by you!

The Big Green Egg definitely shows its strengths when you talk about the numbers behind its performance. It’s hard to deny the efficiency of the Big Green Egg when it can track heat readings of over 750 F (400 C), warm up to astronomical temperatures in about fifteen minutes, and maintain a long cook with a single load of charcoal for twelve to sixteen hours (or more!).

It’s hard to beat objective numbers for a barbecuer, and the Big Green Egg delivers them alongside some genuinely satisfying results. Its true power comes from its ability to slow cook just about anything you can fit in its large enclosure — you aren’t limited to just a few steaks. If you want to toss it in, it’ll probably fit (and the results will be mouthwatering — trust us).

As the name suggests, the XL Big Green Egg gives you even more room to work with. Yet, while its name might make you think that it’s only for those with especially demanding needs, we actually think it’s the best fit for most outdoor kitchens. While the standard Large Big Green Egg is plenty big, the extra space in the XL will ensure you’ll always be covered in everything but the most demanding situations.

Truly, you’ll have more than enough space and power for any slow cooking project. For those looking to take the plunge into the world of kamado grilling, the XL Big Green Egg is our choice.

The BGE XL practically dares you to push it to its limits — if you can find them.

Speaking of limits, the BGE’s unique nature means that you’ve got to have somewhere to put it. This means that you’re probably going to want to purchase a rack from BGE to accommodate your grill of choice.

This is, unfortunately, an added cost.

Likewise, there are a handful of other accessories (or, “eggcessories,” as they call them), that can improve your experience. There’s customizable regulators, rain caps, thermometers, baking stones, and more.

There’s even the EGG Genius that allows you to finely-tune your temperatures through an app.

There’s plenty here to push the limits of what a kamado grill is capable of.

Yet, the sheer number of accessories might be off putting to some — especially after you’ve already bought an expensive grill.

Can the cost of all the additional accessories you'll likely want (on top of an already steep price tag) be overlooked? The benefits of kamado grills extend into other benefits the average grill user should consider. BGEs are notorious for lasting a long time — after all, they’re essentially huge chunks of ceramic. While we can’t say for sure if the EGG Genius will stand the test of time in the same way, we can at least say that most people seem satisfied with it so far.

Ultimately, we think the amount of flexibility offered by the accessories is a good thing — just don’t assume that buying the grill by itself will be enough to achieve the results you’re looking for.

It’s Good, But How Does The Big Green Egg Compare to Other Kamado Grills?

The Big Green Egg lauds itself as being the best kamado grill there is — but is it?

Comparing the BGE’s price tag to both the more expensive and less expensive kamados means asking the big questions about grill performance. Depending on what size BGE you want, prices can range as low as $400 to over $3,000.

That can seem mind-boggling for anyone who is used to the standard charcoal grill. While luxury gas and propane grills have a lot of complex parts, charcoal grills are much simpler. So what’s with the extra cost — and does anyone do it better for cheaper?

There are cheaper kamado grills, such as the Broil King Keg 5000, which retails at around $700 - $900. It has decent reviews, too. Yet, if we’re talking about quality, there’s an immediate clear distinction between the two: whereas the BGE is the real kamado deal, made out of ceramic, the Broil King Keg is made from iron and steel.

You won’t find yourself achieving the same kind of temperature control with it compared to the BGE. The Big Green Egg touts its versatile temperature control — and that’s thanks to its ceramic base and construction, which is modeled after the original East Asian-style designs.

While the Broil King seems to be a grill capable of delivering results, its use of the term kamado ignores the strengths that make ceramic style grills as beloved as they are.

Ultimately, the difference is simple: do you want the real, authentic kamado experience, or do you want something that comes close — and delivers respectable results — but won’t get you all of the way to where you’re wanting to go.

Grills like the Kamado Joe Classic II are more of a direct comparison — in price and ability.

On the other end of the spectrum are the true competitors to the Big Green Egg, grills like the Kamado Joe. With the Classic II touting a similar price tag to the BGE, it deserves a direct comparison.

The Classic II has a simpler base design — and it’s included as part of the package. That means a sizable cost savings for the consumer. Likewise, the Classic II has been reviewed favorably, and it has its own contingent of fans.

Yet, even fans of the Classic II concede that the Big Green Egg has a level of control over temperature that even the Kamado Joe line doesn’t taut.

A Well-Known Name For a Reason

So, is the Big Green Egg worth it? We think if you can afford it, the answer is absolutely. It’s a legendary name for a reason. It’s a grill that’ll last you a lifetime while still delivering an absolutely delicious product. If you should need parts, accessories or most important a warranty part, you will never have an issue with Big Green Egg!

Barbecuers new to kamado grills and experts alike will find that the investment is not unwarranted, and the more substantial level of control over all of its competitors gives it a unique edge and a convincing argument to put down the extra money.

At the BBQ Depot we pride ourselves on our vast knowledge and experience when it comes to choosing a grill that will last. We’ve been selling and repairing grills for decades and we know which ones can be relied on and which ones cannot. Let’s make this the summer you finally buy the grill you’ve always wanted.

Contact us today with any questions and we’ll help you find the reliable grill you’re looking for.

The BBQ Depot is committed to having the lowest online prices!

No problem! We'll match the lower price if it meets these simple requirements:

Submit a request here and we'll get back to you as soon as possible. Thank you.