Epic Grub Ideas to Chef on Your New BBQ! 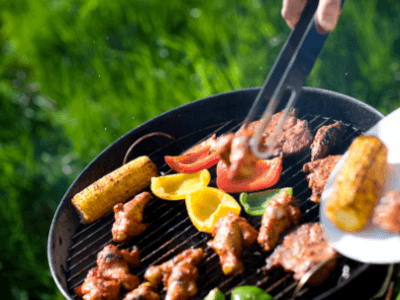 What we are saying is that when it comes to the foods you grill, many of us find ourselves getting into a rut, cooking the same things over and over again. So before you toss that slab of hamburger or those chicken legs on the BBQ grill, take a look at these mouth-watering ideas. Don’t be afraid, the outcome will be amazing.

Forget that frozen pizza or the tasteless slices you get at the chains, grill yourself an awesome pizza right on your BBQ grill. Just find a pre-made pizza crust at your local store and place it on the grill. When grill marks appear, flip it over, add your cheeses and topping and grill until it is a melted mound of goodness.

Roll yourself some meatballs. place them on the grill and cover them up. Cook them three to four minutes then turn them over, in about ten to fifteen minutes, you will have meatballs fit for the best spaghetti dinner in town. Just make sure you make your meatballs big enough so they don’t fall through the grill.

There is nothing more savory than a plateful of buttery oysters. Just place the oysters, flat-side up, on the grill and cover. When the shells open, plate them and dig in.

Take two tortilla, brush them with olive oil on one side, fill with your favorite ingredients like chicken, avocado, bell peppers, onions. beans and cheese and place it on the grill oiled side down. In just a few minutes, you will be enjoying a cold beer and a tasty quesadilla.

If you are in the mood for a tasty side dish, grill yourself an avocado. That’s right, cut them in half, but keep the skin on them, take out the seed and coat with olive oil. Place the flat side on the grill for five to seven minutes and there you have it. Pull them off the grill and top with yogurt or salsa and enjoy.

For fries that are just as tasty, but less greasy than the traditional method, grill them instead. Toss some potato wedges in coconut or olive oil, season and grill them for around ten to twelve minutes, the outcome will put a huge smile on your face.

Cut a peach in half, rub with butter and place flat side down on the grill, after about four minutes, flip over and repeat. Set it in a bowl, drop a scoop of vanilla ice cream on it and you have a dessert fit for a king.

So take your BBQ grill to the next level with these awesome recipes.

The BBQ Depot is committed to having the lowest online prices!

No problem! We'll match the lower price if it meets these simple requirements:

Submit a request here and we'll get back to you as soon as possible. Thank you.