DCS Gas Grill - What model number do I have?

Where do I find my DCS Model Number?

DCS Grills was the one of the first commercial quality grills to enter the outdoor BBQ market. They were considered the "Rolls Royce" of gas grills as no other grill in the market were manufactured with the high end stainless components and revolutionary design and engineering. The grills offered features like a heavy duty rotisserie motor and infrared back burner and a dedicated smoker burner with wood chip tray that were not found in gas grills. DCS was also the first grill that offered lifetime warranty on many of its components .Many changes in the design and engineering of the Dynamic Cooking Systems gas grills have occurred over the years. They differentiated these changes was through the model number. Knowing your DCS Grill Model is important when replacing parts. But there are times where model numbers have worn off or manuals have been misplaced. Do not worry ...

We will reverse engineer the grill through identification of the parts. This will be important because Burners, Ignition, Knobs and heat disbursement system has all changed over the years. This will be useful if you do not have your model number. 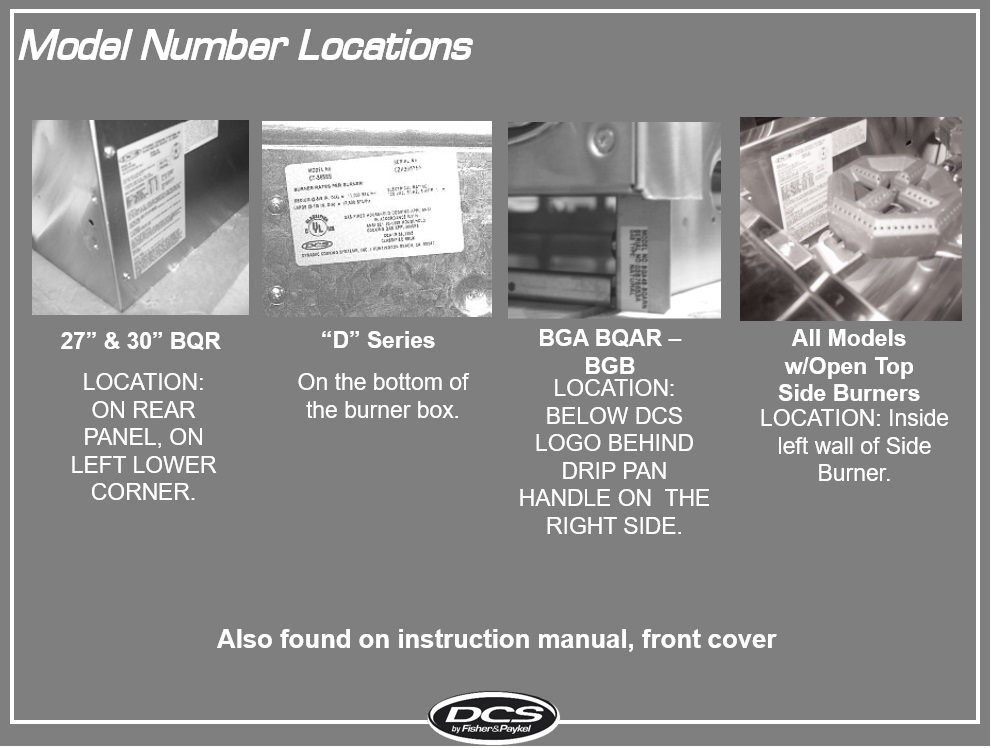 2. If you have located your model number, replacing parts will be simple.

We will show you how to breakdown the DCS Model Numbers : We will show two different examples.

In example A, the first two or three letters relate to the following codes :

In example B, The first three letters relate to the following codes :

The numbers after the DCS, BGA or BGB is the width of the grill in inches. This will determine the number portion of the model number.

Letters after the dash indicate features of that unit. All models will have BQ. 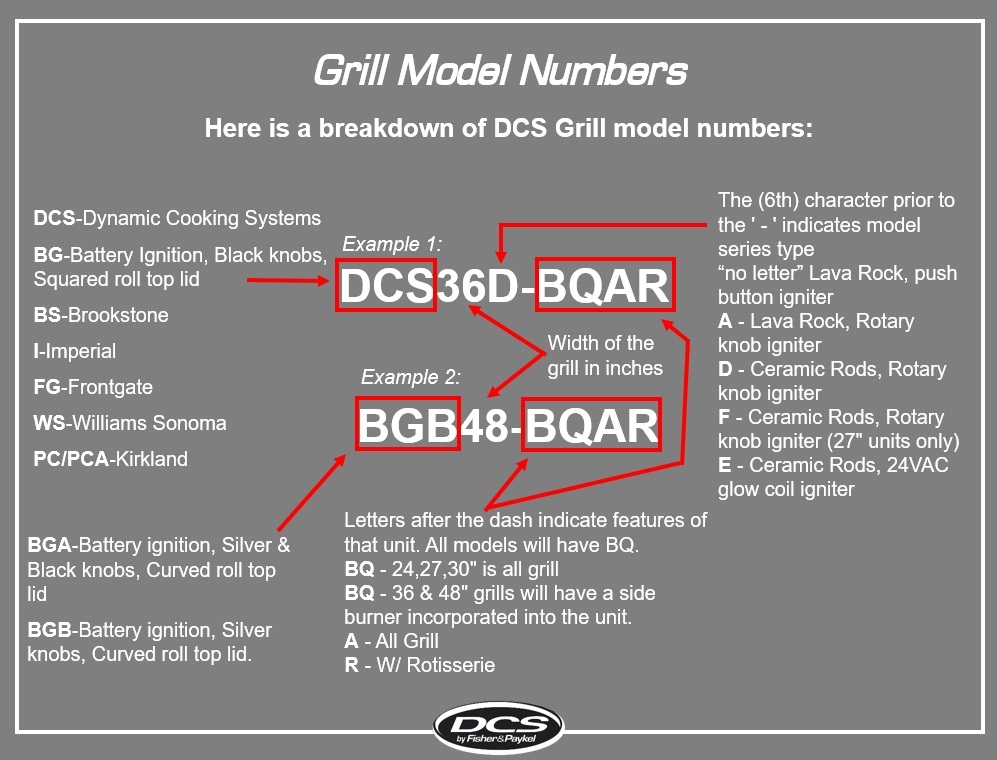 3. If you cannot locate your grill number, we can begin to narrow down your grill model by the heat distribution system that was used in the grill.

Under the Cooking Grates Does the grill have A. Lava Rocks, B. Pyramid Rocks, C. Corrugated Radiant Tray or D. Ceramic Rods?

Once you have determined what heat distribution system is in your grill. Scroll to that section.

A. Lava Rock - Grills that used the lava radiant trays also used a Cast Iron burner. These radiant trays sit directly on top of the burner as the burner is designed with pegs for the tray to sit.

Does your grill light with a push a button or turn a knob? (These grills also have a squared roll lid) 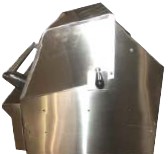 * If your grill uses a Single Spark Push Button Piezo Igniter (this was the first style igniter that was used in a DCS Grill. This type of igniter has a hard snap when the ignition button is pressed), your Grill Model is :

* If your Grill uses a Rotary Igniter (this was the second style of ignition used in the DCS Grills. It is also a piezo style ignition that snaps. The difference is you turn a knob versus pressing a button, your grill model is an "A" Series :

B. Pyramid shaped briquettes - Does your grill light with a push a button or turn a knob? (These grills also have a squared roll lid)

C. Corrugated Radiant Tray - The only model that used a waffled radiant tray is the BGA26-BQ

D. Ceramic Rod Rollers and Trays - Once you have determined that your grill uses ceramic rollers, you will also need to identify the type of ignition system in the grill. Does your grill use a battery operated spark ignition, a rotary knob or a Glow Coil?

* If your grill uses a battery operated spark generator - You will have to determine if your grill has solid Black control knobs or Silver ?

* If your Grill uses a Rotary Piezo Style Ignition - It is a "D" Series. This series introduced stainless steel U shaped burners and cast iron "finger grates"  in the 36 & 48 grills. These grates used a channeled surface that would allow grease to flow away from the burners minimizing grease drippings that cause flare ups. You had the ability to flip the grates to the non channeled side for less greasy foods. The cast iron finger grates have been discontinued. It has been replaced with cast stainless finger grates which last years longer. The cast iron version had a porcelain coating that when chipped would cause the crates to rust out.

The "D" model also saw the end of lava rocks as effective heat conductors for reaching higher heat. Temperatures conducted in the DCS grills through porcelain rods that locked into a stainless steel tray.

* If your grill uses a push button 24VAC Glow coil, it s an "E" Series. These model numbers include

DCS no longer offers the 24, 26 or 27 model grills. The current model grills are BGC30-BQ which does not have a rotisserie. BH1-30R, BH1-36R, BH1-48R, BH1-48RS which has an integrated side burner. The H in the BH stands for Heritage. DCS will be introducing a line of BE Grills where the E will stand for Evolution.

Once you have identified your model number, we will be able to determine the correct parts in your grill. IThe f you should have any questions, need assistance determining parts or do not see a part you need listed on our website, please call us at 877-983-0451 or email info@TheBBQDepot.com

TheBBQDepot.com is committed to having the lowest online prices!

No problem! We will happily match the price if it meets these simple requirements:

Submit a request here, and we will get back to you as soon as possible.